A Light in the Dark by
Rated:XXX

After being told by another trainer about a monster in an abandoned mansion, Jake and his Cinderace decide to go check it out for themselves. Fortunately for them, the encounter turns out to be a quite fateful one.

"Am I... dreaming?" Here is a compelling story about a woman named Rachel who talks to fictional people in her head. One of them is named Clyde. A water bending chameleon from a video game who loves to kill. One peaceful day Rachel finds herself wound up in a weird alternate reality where she meets up with the titular reptilian. Clueless and a little afraid, the devoted two embark on a quest to leave the bizarre world.

Watcher of Arceus - Path of the Immortal by
Rated:R

Full Summary: Watchers, the direct descendants of Arceus herself, sets of twins born with the power to match their older brothers and sisters, the legendary pokémon. Born in pairs, these twins were meant to bridge the gap that had come between humans and pokémon early on in time, one gifted to look human, born beside a pokémon companion. Inseparable immortal twins, the godchildren wandered the world not to preach the word of their mother, but merely to promote peace. Over the course of history however, things have changed. Now, in modern times, a single pair of twins remain, the last of the once great godchildren. (Ratings and Warning will be added as needed)

Nix the eevee is a solo explorer who wants to take on higher rank job missions, but can't due to his solo status. Eventually he decides to take a more active approach to finding people. In doing so, he ends up having quite the experience, both good, and bad.

Kiss By A Rose by

As for the story it is between a Lucario and his Trainer who both developed special feelings for each other, but kept them hidden. Until after winning the Pokémon League, where Lucario told his Trainer about said feelings, the Trainer, named Johnahan, accepted and reciprocated them, and well, they have a steamy sex session together, making their bond grow stronger.

Lucario is droped off at Sarah's house by Johnathan, who has to go to the League of Champions meeting, little does John know, Sarah has other plans for Lucario...

After the League of Champions meeting Johnathan and Lucario have some steamy, kinky fun.

Catch a Fennekin by the Tail by

Anthony O'kai never had an easy life, being a survivor from the destroyed Geosenge town, this boy of thirteen sets out on his pokemon journey only to find that his journey will be far from normal.

A story between a trainer and his Victini, is a work in progress.

There's a reason they call them monsters. by
Rated:R

Pokemon are released into the real world. The only problem is that they're not very friendly.

Twenty year old college student William Lucas has the ability to talk to Pokémon. At the end of a particularly bad day he meets a wounded Eevee, and the two quickly form a bond. Little do they know a path of adventure and discovery awaits them. 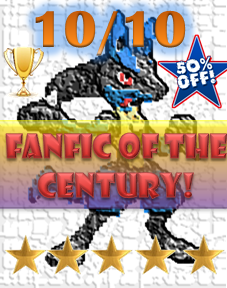 A freshman's year by
Rated:XXX

Hiro is a new student in mystery academy,his life is calm and quiet rather boring until a female espeon comes in his life and changes all that forever.

An Espeon comes across an Umbreon, half starved and wanting to die, but takes it upon himself to nurse the Umbreon back to life. The Umbreon just wants to be left alone, but hasn't met an Espeon quite like this one.

Trainer gets it on with his typhlosion after winning a tough match.

In the Heart of the Desert Spirit by
Rated:XXX

This is a story about the adventures of one Pokémon trainer and his Flygon, a romantic tale of their relationship as they leave civilization behind them and blaze their own trail. For those with open minds who do not wish to spoil what lies inside, leave the warning below aside - but if you find yourself contemning adult stories for daring to be less vanilla, be warned rather than complain.

Disclaimer: I do not own pokemon, nor the general species contained within this story. However, the flygon's character, her trainer, and the writing itself are all mine! No intent to infringe on any existing copyrights exists herein, just writing for the pure and simple love of writing.